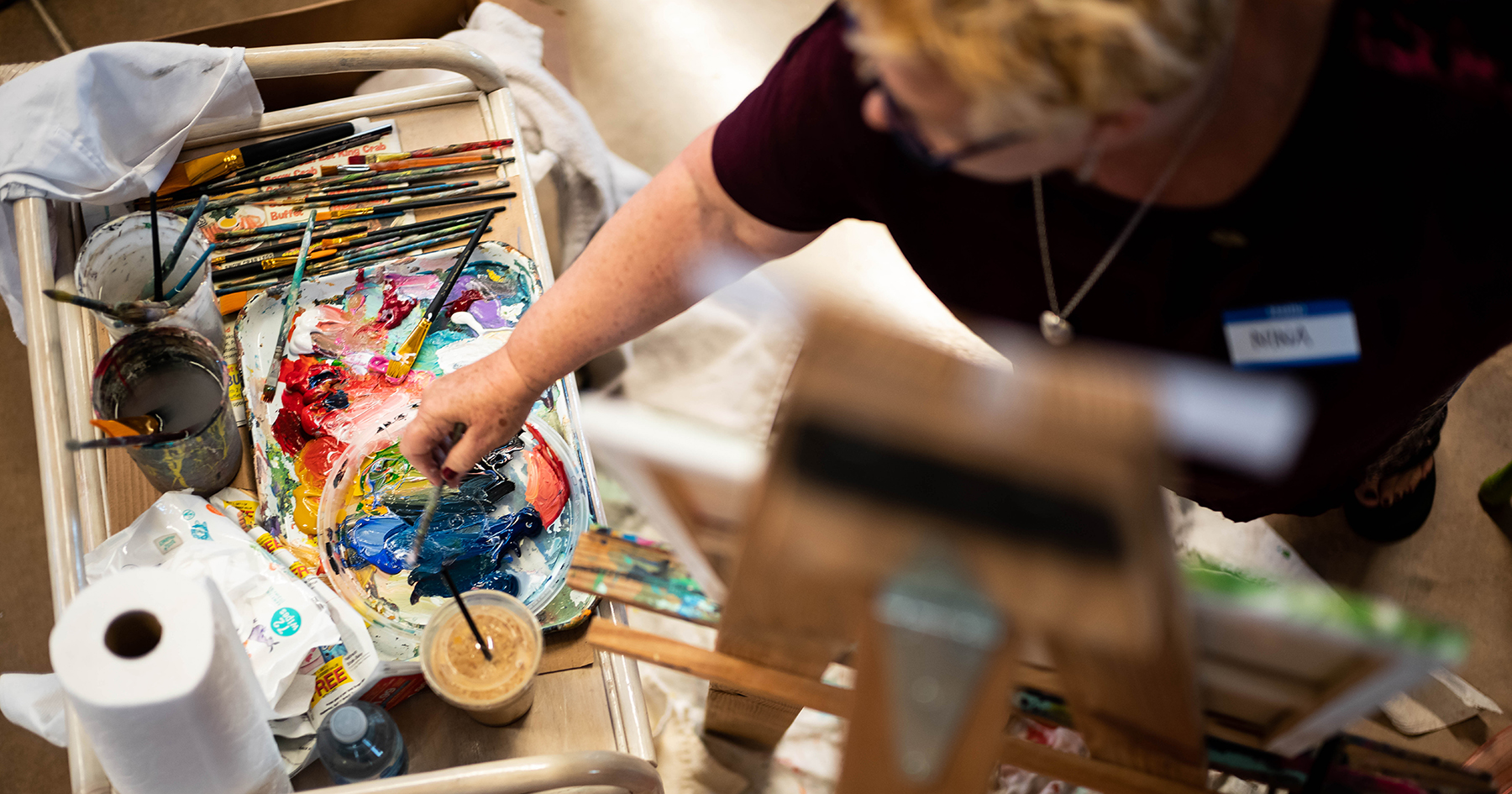 The $8,500 awards are made through a highly competitive process.

Some key changes to the program have come as of FY22. The increasing of the award to $8,500 from $5,000 is the first. The second is the addition of more modern, inclusive disciplines to its established rotation over the course of four years: spoken word and slam poetry; time-based art, which includes installation, sound, experimental film, video art, computer-based technology or performance); choreography and directing in film, theatre, and opera; and the design arts, which include architecture, fashion, graphic, industrial, or interior.

“The fellowship program is one of the arts commission’s signature programs. It directly impacts artist development, one of the agency’s three core functions,” Artist Services Director Ce Scott-Fitts said.

“Increasing the award makes the program more prestigious, but better serves the recipients. They receive financial resources so that they may focus on developing and creating art. Adding disciplines allows for more inclusion while demonstrating how many aspects of the creative economy are touched by the arts.”

A diverse group of panelists from each discipline is selected to judge applicants. The application process is no longer anonymous, and awards are no longer made solely on artistic merit. Consideration is given to achievements and commitment to the discipline in which artists apply.

Fellowships lend prestige to an artist’s reputation and can open doors to other resources and employment opportunities. A list of accomplished fellowship recipients is below.

The disciplines in the FY23 rotation are:

Each category will have one recipient if enough applications are received.

This page serves to showcase the current grantees and some of their representative work samples.

Learn about the grant here

When soliciting artist statements, the South Carolina Arts Commission (SCAC) provides artists complete latitude for those statements they craft to take any form. Publication of said statements does not—and should not be understood to—indicate endorsement by the state of South Carolina, SCAC, or agents thereof. Winner of the 2020 South Arts State Fellowship for South Carolina and a 2018 ArtFields second place award, Ryba’s work has been touring the Southeast in painting and printmaking exhibitions since 1990.  A Magna cum laude graduate of the College of Charleston, Ryba also studied at Vermont Studio School and Studio Camnitzer in Valdotavvo, Lucca, Italy, and has her Master of Fine Arts from Union Institute and University, Vermont College. She has won various awards and scholarships. A founding organizer of Print Studio South, Inc., she served as its president and on its board and has taught locally in both adult and children’s programs. Ryba was one of 10 artists featured in a 2002 Piccolo Spoleto exhibit and was invited to exhibit in Contemporary Charleston 2004 and in Helping Hands: an artist’s debut among friends in 2005. Her work was featured in the 2018 Biennial in Columbia. Ryba also exhibited at Silo in New York City and her work was in the 2007 SOHO20 Chelsea show honoring The Feminist ART Project.

Over the last several years, my interest in the study of Medieval and Renaissance art has informed my work. This series of paintings is based on images from centuries ago that serve as a vehicle to simplify an urgent message by providing symbolic and instructional imagery to illustrate and illuminate the leadership crisis of 2016-2021. All the elaborate gold surroundings, displays of wealth, messages of morality and ethics corresponded with what was happening in our government. Among those are the gutting of our social safety net and health care; eliminating environmental protections; the lack of restraint in spending money on personal enrichment and pleasure; and the build-up of military spending and deficit in international diplomacy. The Fall of Tyranny Revolt of the Peasants Clay Burnette is a self-taught pine needle basketmaker who has been coiling longleaf pine needles with waxed linen thread since 1977. Burnette’s work is included in numerous public and private collections—including the State Art Collection—and has been included in more than 250 exhibition venues throughout the U.S. and abroad for 40-plus years. He has also been published in numerous international, national, and regional magazines, catalogs, and fine craft publications. Burnette has taught at Arrowmont School of Arts and Crafts in Gatlinburg, Tennessee since 2015. Images of his work are available at www.clayburnette.com.

When writing an artist statement, I try to adhere to these wise words: Keep it simple, stupid! So… I make baskets by coiling pine needles with thread.

I begin the process by trekking into the South Carolina sandhills, where I gather fresh pine needles from young longleaf pine trees. After returning to my studio, the needles are colored with fabric dyes, acrylic paints and inks, and then sewn into coils using waxed linen thread. When completed, each piece is preserved using a light coating of beeswax. My tools are simple: a large steel upholstery needle and a pair of sharp pointed scissors.

I utilize the most basic basketmaking technique of coiling to create contemporary shapes and sizes that incorporate lots of patience, persistence, reflection and a vivid imagination. Time is irrelevant whenever I am stitching. The exploration of color, pattern, texture and form keeps me focused on the moment, but always planning for what is yet to come. Sherard “Shekeese” Duvall is a film and messaging professional from Columbia, S.C. He specializes in visual storytelling, film education, media strategy, diversity consulting and is an advocate of Hip-Hop culture. He’s produced commercial and documentary projects for VH1, Oxygen, and more. A 2021 Liberty Fellow, a 2016 Riley Fellow, a Leo Twiggs Arts Leadership Scholar and one of the founders of Columbia’s Hip-Hop Family Day: Love Peace & Hip-Hop. A 2001 University of South Carolina grad, Sherard is a product of Richland District One schools. Sherard is the Founder and Executive Producer at OTR Media Group, and the proud dad of his son, Cairo.

As a southern filmmaker, the challenges all revolve around resources and access. In South Carolina, the film industry is small and contained. There are very few resources, outlets, opportunities, and communities for filmmakers to tell stories that have a chance to make it outside of the borders of South Carolina. That is why, for me, success as a filmmaker looks like making the kind of work that lifts humanity, that looks beautiful, tells untold stories of people that look like me that resonate across humanity, and that gives young aspiring South Carolina film industry hopefuls and workers access to the resources that can help them tell their own stories.

“From Job To Career” SC Center for Fathers and Families short from OTR Media Group on Vimeo. (Director/Producer, 2019) Triza Cox is a playwright, screenwriter, and theatre artist. She is currently the South Carolina Ambassador for the Dramatists Guild and is an associate member of the Society of Stage Directors and Choreographers. Her research and creative work center on playmaking using Jungian archetypes, motifs, and symbols of the collective unconscious. Triza holds an MFA in Theatre Performance from the University of Louisville and has trained with Dell’Arte International School of Physical Theatre and the Mandala Center for Change as a Theatre of the Oppressed Facilitator. Her original plays include A Last Supper; The Willing, which recently received a staged reading with Triad Stage in Greensboro, North Carolina; God in the Midst of it All; and Lil’ Bard which was a semi-finalist in NYU’s New Plays for Young Audience 2018 and premiered at Charlotte’s Children Theatre in a staged reading. Triza has received a Kentucky New Voices grant for her playwriting.

Joseph Campbell once wrote that the difference between a littérateur and an artist is compassion: the artist has compassion for the human experience. Curt Tofteland, the founder of Shakespeare Behind Bars, expanded on this idea of the necessity of compassion in art when he stated that “empathy is not a part of human nature. It’s not just there by natural occurrence. It’s there by example through what you see… We do that through art and literature. “These ideas of these great men proved true to my development as an artist and as a human being.

My research and artistic projects concentrate on using Jungian archetypes, myths, motifs and monomyths for theatre making. I have a mission to democratize the consumption of art while raising the aesthetic; this mission manifests in my creation of plays and productions that often have social justice themes but are well crafted and utilize classical and innovative techniques. I focus on creating works that resonate with the collective unconscious and thus are transcendent.

My projects include and move beyond many of the elements of Commedia dell’Arte, Butoh, and traditional Eastern storytelling in writing original scripts and theatre devising. I realized these techniques in my 2012 thesis production for the University of Louisville: Mad at Miles: A Black Woman’s Guide to Self Defense, a devised play created from essays from Pearl Cleage about domestic violence. The work on this production led me to research Carl Jung’s theories on the collective unconscious and archetypes. I used these theories to create characters from Pearl Cleage’s essays. This work was a turning point in my artistic career, because it helped me pinpoint what truly makes theatre transcendent: the images and motifs of archetypes and the collective unconscious. The process also allowed for me to gain understanding in playwriting and screenwriting. My original works include “Paris County”, a television pilot; A Last Supper; Meritocracy; The Willing, which recently received a staged reading with Triad Stage in Greensboro, North Carolina; God in the Midst of it All and Lil’ Bard which was a semi-finalist in NYU’s New Plays for Young Audience 2018 and premiered at Charlotte’s Children Theatre in a staged reading.

I often think of my artistic approach as purposeful expressionism. From the days when I was 15 years old and watching my first Broadway play, I knew that theatre was a powerful communication between performer and audience. As I have grown as a playwright, performer, and director, I understand it is a communication among the audience and ALL the artists who serve to make a show happen. Therefore, in all my artistic endeavors I aim to move beyond an indulgence of displaying moods, neuroses, and fears on screen and stage. Instead, I hope to touch on what is true about the human psyche. In my writing and in my dramaturgical approach, I utilize many theories including the writings of Carl Jung, Marion Woodman, Stella Adler, Hegel, Ralph Waldo Emerson, Joseph Campbell, and other titans of mythology and aesthetics. I also research how various themes or ideas fit within the collective unconscious and what they mean in the course of the individual and collective human development. The results of these efforts are nuanced works created through strong technique and grounded in various aesthetics and the verisimilitude of the human condition.